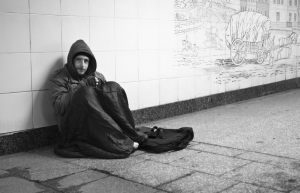 Under the Conservative-led UK government, homelessness has risen 55% in the past five years. Photo: homeless man in London. By Victoria Johnson.

After that, Lugaid mac Con was a year in the kingship of Tara, and no grass came through the earth, nor leaf on tree, nor grain in corn. So the men of Ireland expelled him from his kingship, for he was an unlawful ruler.
– Aislinge Meic Conglinne, trans. Preston-Matto, 2010

A ruler’s truth overpowers armies. It brings milk into the world, it brings corn and mast.
– Early Irish text cited in Ó hÓgáin, 1999

In ancient Ireland, the king’s justice, the King’s Truth – fír flathemon – was the condition of sovereignty on which the prosperity of the land depended. If the king ruled with justice, the land prospered. If he failed in this, the land was barren, and the people suffered. Eventually, he would be…